In July 2016, Tariq Khusroo, a non-resident Indian, came home to Hyderabad on a holiday. He had been thinking of getting a hair transplant. So, when he saw advertisements for Dr Khan’s Hair Transplant Centre and read the good recommendations that came with it, he thought he would get the procedure done before he returned to Saudi Arabia for work.

Little did he know that it would be the last time he would be able to see with both eyes, or even have a job.

Soon after the surgery, Tariq developed life-threatening complications, which resulted in him being rushed to the hospital and, ultimately, the removal of his right eyeball.

“I am still traumatised. I have lost my job and have been confined to my home. Even after months of hospitalisation and at least ten surgeries, I have to keep making trips to the hospital,” Tariq rues.

It revoked his registration for two years and barred him from ever performing a hair transplant until he acquires proper qualification and registers with the Council.

How Tariq lost his eye

According to the website of Dr Khan’s Hair Transplant Centre, Dr Ishratullah’s qualifications are listed as “MBBS, FRCS, ISHRS (USA)”. While FRCS stands for Fellowship of the Royal Colleges of Surgeons, ISHRS is short for International Society of Hair Restoration Surgery. He also claims to be a member of the Asian Association of Hair Restoration Surgeons, and says he has a Fellowship in Hair Transplant (Chandigarh).

However, the Council found that he only had an MBBS degree, and no postgraduate certification or the required certification to conduct hair transplant procedures.

Tariq tells TNM that he developed complications within 12 hours of the surgery, which he underwent on July 26, 2016. “I had swelling in my head and eyes. But Ishtratullah told me not to worry and that it would subside. But by night, I was unable to move, eat or even breathe properly,” he says. 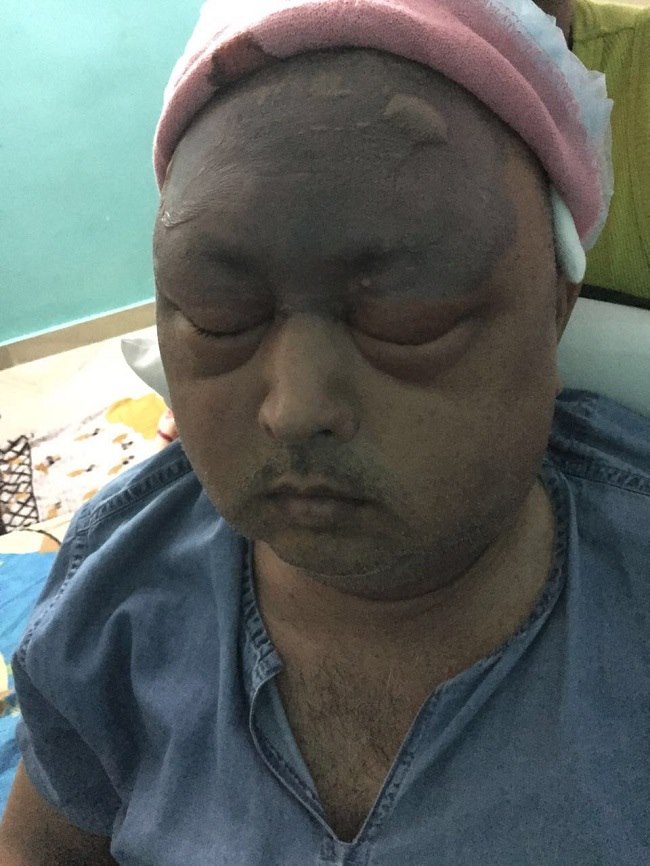 He was rushed to Care Hospital in the wee hours of the morning.

Dr Gyaneshwar, a consultant plastic surgeon who attended Tariq’s case, tells TNM that they found him to be infected with ‘Necrotizing fasciitis’, which results in the destruction and death of the body’s soft tissue. “It had affected the skin muscles in his scalp, eye and eyelid. The muscles were dead and when he came, he was having difficulty breathing,” Dr Gyaneshwar recalls.

After an emergency tracheostomy to help him breathe, they tried to save his eyes. “Within a week though, they realised they would have to remove my right eye completely or risk the infection spreading to my left eye as well,” Tariq says.

Even after his right eyeball was removed, Tariq says he remained in the hospital for two months, half of which he spent in the ICU. Dr Gyaneshwar confirms that he underwent about 10 surgeries at the time.

Dr Gyaneshwar says that such an infection could have happened because of three reasons: post-operative complication, patient complication or incorrect sterilization of the equipment used. He elaborates on the second cause – it is possible that since Tariq was a diabetic, proper precautions were not taken to control his blood sugar before the surgery, leading to complications.

While he cannot be sure of which of these caused the infection, the Telangana Medical Council found Dr Ishratullah guilty of professional misconduct on the following grounds:

- He told Tariq that he would make 3500 grafts and from such grafting, his tissues for hair growth will be formed.

- He was found to have no qualifications to state that he has “special training”, his degrees are unrecognised and, based on these unregistered degrees, he claimed to be an expert to attract clients for hair transplantation.

- He did not evaluate Tariq thoroughly considering that the latter was elderly and diabetic. “You have not obtained any specialist opinion regarding effective treatment before or after the surgery. Surgery in a diabetes patient is known to fall into complications like sepsis. In case of post-surgery, patient developed infection, cellulites and gangrene,” the Council order notes.

Dr Ishratullah meanwhile, told another publication that he did not want to comment on the issue, but had filed an appeal in the Medical Council of India and obtained a stay.

Dr Gyaneshwar says that the community has been seeing a sharp increase in the instances of unqualified medical professionals performing medical and surgical procedures they have no qualification for. “You must always ask to see certification of their credentials and verify that they are from accredited institutions,” he asserts.

Ottawa: Canada’s Chief Public Health Officer Theresa Tam has confirmed a total of 278 cases of monkeypox in the country as of June 29. The cases had been reported nationally, including four cases from British Columbia, five from Alberta, 67 from Ontario and 202 from Quebec, the top doctor said on Th...

Hyderabad: The Telangana Cyber Crime Coordination Centre (T4C) managed by the Telangana police since its inception on June 19 last year has been able to put on hold Rs 15.47 crore that was swindled from citizens in various types of cyber frauds in the State. “As soon as a complaint is received, the ...

Noney: Fourteen people were killed and several others are feared trapped in the rubble of an under-construction railway site at Manipur’s Noney district which was hit by a massive landslide landside, officials said. “As many as 23 people were extracted from the debris of which 14 were dead. Searches...

Hyderabad: Fuel outlets across the State are witnessing a shortage of diesel with around 30 per cent less stock compared to the regular quantity they have in store. Generally, the stock available in the State can meet the fuel demand for 10 to 15 days but presently, diesel will be sufficient only fo...

Hyderabad: Chief Minister K Chandrashekhar Rao on Tuesday asked IT Minister KT Rama Rao and his team to facilitate startups housed at the T-Hub to use modern technology and find innovative solutions to the challenges faced by people in their daily lives. He wanted them to bring about a qualitative c...

Colombo: Sri Lanka’s Minister of Power and Energy Kanchana Wijesekera on Sunday said that fuel stations across the country will issue tokens for consumers from Monday as only limited stocks were available. Speaking to journalists in Colombo, Wijesekera said that the assistance of the Sri Lankan Army...